CHARLIE HALFORD, recipient of the 2016 Literacy Hero Award
Each and every day, ordinary people do extraordinary things to promote literacy in our communities. With these awards, we celebrate the selfless acts of three regional heroes who champion the cause of literacy in San Joaquin and Stanislaus counties. 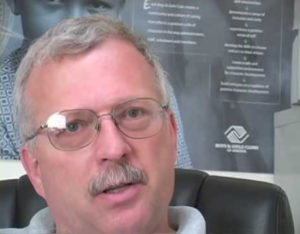 Charles (Charlie) Halford has lived in the greater Manteca/Lathrop area all his life and has been involved with numerous activities that have improved our community.
Charlie is a 1972 graduate of East Union High School; he received a BA degree in Criminal Justice from Cal State Sacramento in 1976. He then graduated from the Police Academy and became a USMC Certified Marksman. He had a long and distinguished career in the police force, earning two letters of commendation, the Manteca Police Officer of the Year award, and the Meritorious Service Award for rescuing two children in a fire. In 1991, he graduated from the FBI Academy, and from 1997-2007, he served as Chief of Police.
Time is very valuable for Charlie, but he is more than generous in his volunteer capacity. He has served as an officer or on the Board of Directors for many nonprofit agencies, including: The Boys & Girls Clubs of Manteca/Lathrop, United Way of San Joaquin County, Doctors Hospital of Manteca; Give Every Child A Chance, and Great Valley Bookfest. He has served on innumerable committees to address the needs of local youth and families, and he is an active member of the Manteca Rotary.
From its inception, Charlie has been an invaluable member of the Great Valley Bookfest leadership team. Without his expertise and boundless energy, this event could never have achieved such rapid growth and popular success. As the Chairman of the Event Planning and Logistics committee, he is a central figure: advising the committee on legal regulations, traffic flow, and safety issues; negotiating many of the permits required for the event; organizing and supervising the early morning set-up for dozens of tents and trucks. He never hesitates to help in smaller ways, too – posting advertising signs, contacting community partners for donations, or just running errands.
This year, Charlie had to miss the Bookfest event because of a family wedding… but he did not leave anything to chance. He worked diligently from January through October and did everything possible to ensure that the 2016 Bookfest ran smoothly.
Charles Halford’s efforts have significantly transformed the Manteca/Lathrop community into a friendlier, more vibrant, and better-educated community – and that makes him a true Literacy Hero.