Carol Costa Minner, recipient of the 2017 Literacy Hero Award
Each and every day, ordinary people do extraordinary things to promote literacy in our communities. With these awards, we celebrate the selfless acts of three regional heroes who champion the cause of literacy in San Joaquin and Stanislaus counties. 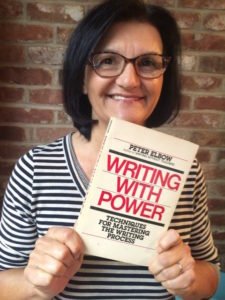 Carol Costa Minner, director of the Great Valley Writing Project for the past 16 years, is a dairyman’s daughter and lifelong Tracyite. She taught middle-school language arts for 33 years at Jefferson School in rural Tracy. She is a product of Tracy schools and California State University, Hayward (B.S. and teaching credential). And she is proud, she says, of the impact GVWP leaders and
advocates are having in dozens of Central California schools. At Jefferson, in addition to her classroom duties, Carol mentored novice teachers, coached sports and was faculty advisor for the student council, the yearbook and the California Junior Scholarship Federation. She facilitated development of a school-wide portfolio assessment and created a district writing policy. Off campus,
Carol was a reader for the California Assessment Program, California Learning Assessment System and the Golden State Writing Exam. She was named California League of Middle School’s “Teacher of the Year” for
Region 6 in 2001. Early in her teaching career, Carol discovered the Bay Area Writing Project
(BAWP) — a network of “teachers teaching teachers” — at UC Berkeley. She was accepted to BAWP’s Invitational Summer Institute and studied under UC Teacher Ed. Professor Jim Gray, BAWP’s founder and progenitor of the National Writing Project. Carol’s mentor and inspiration was Mary Hurdlow, a primary teacher, whose love of children’s literature, especially picture books, spurred Carol to try a variety of books as models for her eighth-grade students. She frequented
libraries and bookstores to find quality picture books to guide her “young writers” as they authored and illustrated their own ABC and wordless books for kindergartners through fourth graders. “Their books were very popular with younger students and inspired them to be ‘authors,’ too,” Carol says. During her years as a teacher consultant for BAWP (and subsequently the California and National Writing Projects), Carol facilitated professional development programs for teachers throughout Northern California, taught at
young writers camps and coordinated the Saturday Seminar program at UC Berkeley.
Farther afield, she led on-site professional development programs for bilingual teachers in Monterrey, Mexico, and San Jose, Costa Rica, and facilitated the drafting of a K-12 writing curriculum on the Navajo reservation in northern Arizona.
She served on the James Moffett Memorial Award committee and the National Writing Project State and Regional Network Leadership Team. In 1996, Carol began working as a consultant with the Great Valley Writing Project
at Cal State Stanislaus. Five years later, Mary Ann Smith, executive director of the California Writing Project, selected her to lead GVWP.
More than 800 teachers and administrators and 400 students and their families  participate directly in GVWP programs annually. Carol has supported teacher consultants to lead family writing nights, student writing camps and professional book studies at their school sites. GVWP offers conferences, Saturday Seminars and Invitational Leadership Institutes for teachers. GVWP partners with the Migrant Education Program to provide four-week summer writing academies. In
2005, Carol organized the English Learners Symposium at CSU Stanislaus for teachers and Mini-Corps students. In 2007, GVWP received the Golden Apple Award for outstanding service to San Joaquin County educators.

Carol has served on the board of Give Every Child A Chance in Tracy, was a project leader for the Jefferson 4-H Club and is a 35-year volunteer for the Children’s Home Society of California. She has been president of the
Tracy Sister City Association since 2012 and has chaperoned student delegations to Japan. She resides in Tracy with her husband, Larry. They have two children: Carly, an attorney in Honolulu, and Rob, a landscape
architect in Walnut Creek.